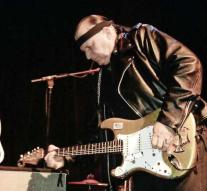 los angeles - Guitarist and creator of the surf rock Dick Dale died at the age of 81. The bass player of his band Sam Bolle has confirmed that.

Surf rock was faster and more aggressive than the existing rock music in the sixties. Dale tried to turn the feeling he had when he was surfing into music.

In addition to coming up with the surf rock, Dale was best known for his riff that was used for the Pulp Fiction by Quentin Tarantino.