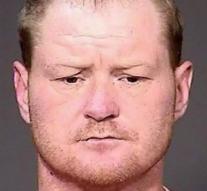 - Justice in the US state of Minnesota accuses a man of beheading of a young man of twenty. This would have raped the girlfriend of the perpetrator. The 35-year-old Joseph Thoreson risks a prison sentence of forty years.

The woman managed to overpower the rapist and took him later Thoresen to a forest. Since the man would have beaten the boy with a baseball bat, having stabbed with a machete and subsequently beheaded. The head and the rest of the body hid the couple in the forest, as the newspaper writes USA Today