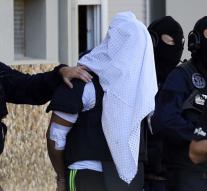 - The man who beheaded his boss in June in France and carried out an attack on a gas plant, has committed suicide in his cell. That the prison authorities Wednesday reported by various media.

Yassin Salhi (35) was stuck in solitary confinement near Paris and was not considered suicidal. He would have hanged himself Tuesday with his sheets to the bars.

The attack took place in June in Isère, near Lyon. Salhi was suspected of murder with a terrorist background. In addition, according to justice religious motives played a role, but it denied the accused.

The head of the boss was attached to a fence. Two people were slightly injured in the attack.