Home / World / Man arrested who was in prison with Liege gunner 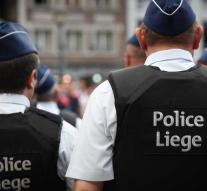 verviers - A special unit of the Belgian police has arrested a man who may have played a role in the radicalization of Benjamin Herman, the shooter who shot two agents and a student last week in Liège. Fouad B. was arrested in the Walloon city of Verviers. According to Belgian media, his name is on the list of IS fighters and recruiters in Belgium.

The Public Prosecutor investigates whether B. was involved in the radicalization of Herman when they were both detained. A jailer from the prison had to leave for 36 hours a day for Herman if his management expressed concern about his radicalization. B. was conditionally released on 22 May according to the federal prosecutor's office.

B. would be part of a group of about 25 people in Verviers who are listed as radicalized. A terror cell was rolled up in the city in 2015, which was in contact with IS in Syria through intermediary Abdelhamid Abaaoud. Abaaoud is considered one of the protagonists of the attacks in Paris in November 2015. He escaped, but was later found and shot by the police.