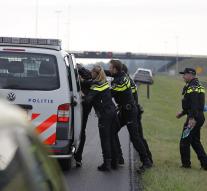 - On the A16 at Zevenbergen Sunday afternoon in the direction of Bredafound a man on the highway. As far as is known, he had no car with him.

The man looked confused and has a head wound. He became aggressive after being helped by paramedics . He was then transported to the police station with a police car.