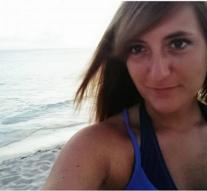 - The police on the French part of Saint Martin on Tuesday arrested a suspect for the murder of the Belgian tourists to Wendy Montulet (21). That the attorney of St. Martin confirmed Wednesday (local time) during a press conference. According to local news website Soualiga Post has known the man.

The suspect is a 21-year-old inhabitant of the island in the Caribbean Sea. 'A young guy with no criminal record,' said the attorney. He'd Belgian wife, also 21, have dragged into the bushes to abuse her there and murder. He stabbed her several times with a piece of glass.

According Nieuwsblad. be is the suspect a young guy with a dark complexion, red hair, and he wore striking clothes. With those clues the police had addressed further. On the beach, they found a man who lived up to the description. He denied, but traces of blood were found on his shoes and shirt. After much questioning, the young man known. According to the attorney, he showed no empathy with his victim.


The woman was with family and friends on holiday on the island. Saturday she wanted another round go running before they would fly back to Belgium that day, but she did not return. The newly qualified woman the next day naked in the bushes at nearly 500 meters from her hotel found.

The mother and stepfather of Wendy, who currently reside in St. Maarten, times Saturday along with the body of Wendy back to Belgium.