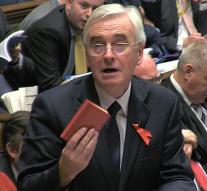 london - The great Chinese helmsman Mao Wednesday unexpectedly played a role in the British Parliament. To the amusement of the audience conjured opposition member John McDonnell Labour unexpectedly Mao's famous red book emerged during a debate on the confidence of the Conservative British government in major Chinese investment in the country.

McDonnell criticized Finance Minister George Osborne about what he called the " nationalization of British industry by other countries such as China ". He offered to " to help fellow Osborne in negotiating with new comrades ". He read the minister a wise counsel of Mao : people should do if they know something when they do not know anything.