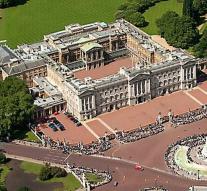 london - For the third time this year, someone tried to get inside the gates of Buckingham Palace. Scotland Yard took Friday a 21-year-old man after they had climbed over the fence.

The man, who immediately was arrested after his climbing party had no weapons. He is still in custody. His mental state is investigated, reports the BBC. There were no members of the royal family at the time of the incident have been in the palace.

In August, a 22-year-old man was still held outside the gate when he had climbed over a safety fence. A few months earlier passed a 41-year-old man managed to keep himself seven minutes inside the fence before he was nabbed.