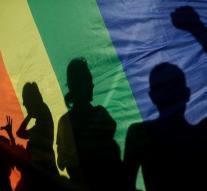 valletta - The parliament of Malta decided on Wednesday evening to allow marriage between men and women or women. Only members of the Nationalist Opposition Party voted against the amendment of the law.

In the new law, gay couples receive the same right of adopty as heterosexual partners. In addition, gender indications such as 'husband, wife, mother and father' will be replaced by gender-neutral concepts in the text.

Adopting the proposal is a milestone for the pronounced Catholic island state in the Mediterranean. Only in 2011 was the divorce law introduced. Following this new decision, the streets of capital Valletta expelled the rainbow flags. Premier Joseph Muscat spoke of a historic day. 'We can now all say we're right. '