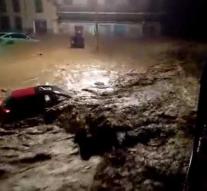 palma - On Majorca the death toll has risen to six after the storms last night. Nine people were also officially reported missing, three wounded and two hundred people were expelled from their homes. That says the coordination center of the 112 emergency services.

Possibly the number of missing persons is higher, emergency services search with all their might for people who could not escape the storm. In total, three hundred nurses, police officers and other rescue workers are working in the region.

One of the fatalities was found early this morning in the village of Son Servera. The other five dead fell in Sant Llorenç. Two of them are British. The last woman to be found is a woman who could not get away in time from her basement house and was surprised by the water.

A hundred people have been driven out of their homes by the heavy weather and have spent the night in sports halls in neighboring villages.