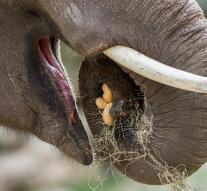 According WILD Foundation , which helps protect elephants in the Gourma region in Mali , there are since late last year even ninety elephants slain .

Poachers strike mainly in areas where the government of Mali has no control . Except in Mali there are only desert elephants in Namibia.