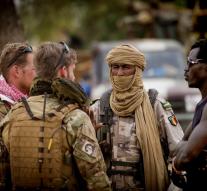 bamako - The Government of Mali calls for ten days, a state of emergency. The authorities react therewith according to sources within the security services on threats from jihadist groups. It is still unclear what groups are involved.

It's been years of unrest in the African country. Thus, France had to intervene in 2013 to halt the advance of groups of jihadists. Thus the violence in the country was not at an end. Last month 20 people were definitely killed by an attack on a hotel in the capital Bamako.

In the aftermath of that attack, the emergency was declared, but which has now expired. The government said Monday know to repeat the measure. The state of emergency, the relevant authorities must give the tools to companies that threaten the safety of people, identify and counter , said in a statement.

There are also Dutch soldiers operating in Mali.