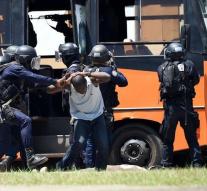 bamako - Mali has arrested two suspects are associated with the deadly attack on a tourist resort in neighboring Ivory Coast. That military spokesmen confirm the country Sunday. The attack two weeks ago was claimed by al Qaeda in the Islamic Maghreb, the North African branch of the terrorist movement.

The two men were arrested in the north of the Timbuktu region. One is the driver of the suspected leader of the terrorist operation, Kounta Dallah, which is still a fugitive.