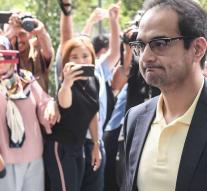 Three initiates have also confirmed the arrest of Najib. The arrest would be related to the investigation into the disappearance of billions from state fund 1MDB.