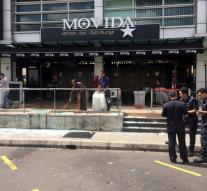 - An attack with a grenade last week at a nightclub in Malaysia was on closer inspection the work of terror group Islamic State. Police initially thought to a business conflict or other settlement, but research has shown that two arrested suspects had been instructed by a famous Malaysian IS-warrior.

That Inspector-General of Police Khalid Abu Bakar explained Monday. The grenade was thrown at the nightclub while people there watched a round of the European Football Championship. The police had her initial suspicions about what was behind it after adjusting IS had claimed responsibility through Facebook.

Khalid said the suspects were controlled by the jihadist Muhammad Wanndy Mohamed Jedi. In the course of the investigation were arrested thirteen suspects, including two policemen. The detainees, all Malaysians, instructions had been given to carry out attacks on government officials and places of entertainment.