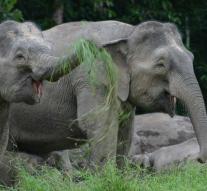 kuala lumpur - Malaysia has investigated the increasing mortality among dwarf elephants, an endangered species living in the tropical jungle on Borneo. This year, 25 copies were found dead in the northeastern state of Sabah. That is a record, according to the director of the Regional Nature Conservation Service. More than a hundred elephants have died in the last eight years.

The dwarf elephant- striking by a smaller shape, oversized ears, tail to the ground and fairly straight tusks- only occurs on the island of Borneo, which shares Malaysia with Indonesia and Brunei. The World Wildlife Fund (WWF) estimates the total population on 1500 animals. Loss of their natural habitat through deforestation is the biggest threat, but poachers are also a problem.

However, they do not explain the current mortality figures. However, it has been noticed that elephants leave the rainforest more often and wander around oil palm plantations. On Saturday, nature conservationists found the remains of an elephant cow there. A wound on the head could have been caused by a bullet.