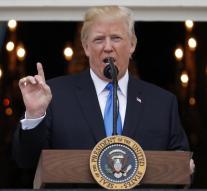 wahington - The creator of the video, in which US president Donald Trump ignores the CNN's logo, has apologized to television channel CNN.

Reddit user 'HanAssholeSolo' published the video last week on that site. On the site, the user whose actual identity is not known explains his act. According to the user, it was about the satire and it was not his intention to attack the video media organizations.

Trump spread the video via his Twitter account. It caused him to be critical of a storm. The American president has repeatedly criticized several newspapers and news channels in his country since his arrival. He did not excuse himself for spreading the video.