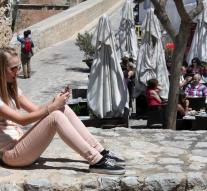 the hague - The cost of calling from the Netherlands to abroad should be limited, just as it has happened to roaming abroad. For this, D66 argues. The party wants Minister Henk Kamp (Economic Affairs) to work here in the European context.

Last week, new rules introduced, making it cheaper for EU citizens to call mobile and use data in a country other than the home country. The costs for this are the same as within the national borders.

D66 wants this to be true for calls that people make from their own country to another Member State. 'For this, rates in the Netherlands are sometimes up to 90 cents per minute, and in other Member States up to even 1.99 euros per minute,' D66 Chamberlain Jan Paternotte puts in his questions to Kamp. 'It seems to me nothing more than logical that the Dutch government insisted that this be revised. ''