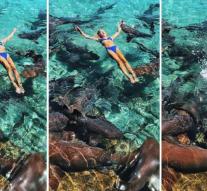 miami - Everything for a nice Instagram photo? The 19-year-old Katarina Zarutskie thought so. During her vacation in the Bahamas she saw a group of people swimming with sharks and jumped into the pool to shoot a nice picture. A few seconds later she was bitten and pulled under water by a shark.

The 19-year-old model is studying at the University of Miami and travels a lot to collect beautiful snaps for her blog and Instagram page.

During her vacation in the Bahamas, together with her in-laws, she had already shot many beautiful pictures, but she did not have a picture with sharks yet. 'Nurse sharks are very quiet animals', the model tells Buzzfeed. 'I've seen pictures on Instagram so often from people who swim with these sharks. '

Her in-laws did not seem like a good idea, but Katarina could not resist the opportunity. Her father-in-law received instructions to take the picture, and at the moment she laid her head in the water she was bitten in her arm by one of the sharks. 'I lay down and then one of the sharks grabbed my arm and pulled me under water. '