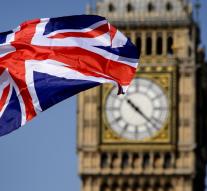 london - For the first time will a majority of the British from the European Union. This is evident from a survey conducted after the attacks in Paris, commissioned by the British newspaper The Independent. For the study 2000 people were interviewed and of those, 52 percent for the Brexit.

Polls by The Independent in June, July and September gave a majority of 55 percent of stay. Coverage of the refugee crisis brought some shift in October to 53 percent for and 47 remain before departure. By the attacks in Paris is shifting further shot.

Proponents of the British departure came mainly from the camp of the eurosceptic party UKIP (93 percent) and the Conservative Party of Prime Minister Cameron (54 percent). A majority of the supporters of Labour, Liberal Democrats, Scottish National Party and the Greens to remain.

Support for the EU is the largest in Scotland with 60 percent, followed by Wales with 56 percent. In southwest England is only 40 percent for EU membership and 43 percent in eastern England. The end of 2017 found in Britain a referendum on whether the country should remain in the EU.