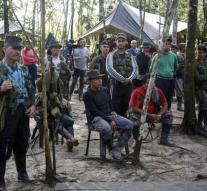 bogota - The population of Colombia resembles a large majority to endorse the peace agreement between the government and the leftist guerrilla organization FARC.

About voters may speak in a referendum just a month. In a survey, whose results were published Friday, showed 62 percent of respondents know they are in favor of the agreement, 28 percent opposed.

The other respondents have not yet determined their opinion. The advocates of the peace treaty gaining ground. A few weeks ago, the voting ratio was roughly in balance. Critics are especially that the rebels get away with relatively low penalties and get seat in parliament.


It is expected that on October 2, at least half of the voters show up. The agreement would end one of the longest running conflicts in Latin America. Since the sixties, there killed more than 220 000 people through the struggle in Colombia.