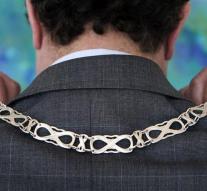 amsterdam - A majority (59 percent) of Dutch voters want to elect their mayor himself. Particularly among D66 voters, that wish is great, while voters of PvdA and GroenLinks rather not have that, according to Maurice de Dog's poll.

D66 has been working for the elected mayor for years. It took years of political twist and then Minister Thom de Graaf even declined in 2005 when it failed to bring the instrument closer. The party now sees a chance to finally catch the booty.

For this, a classic exchange is required: D66 leaves the referendum and returns to the mayor chosen. But political parties who are not on the table of table react to the news that the referendum may be abolished.

There are disadvantages to choosing a mayor, experts. Thus there is fear of a 'clown in the city hall' that the government will not take seriously.

Also read: 'Hey not all kinds of clowns'

But the current system also has disadvantages. The system would maintain the job carousel, be opaque, and if we are off the crown nomination: why not vote for it?