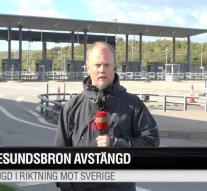 copenhagen - The Danish police closed important access roads to and from the country during a major operation on Friday. Two major bridges and boat connections with Sweden and Germany were shut down.

The reason for the operation is still unclear, but according to Swedish news media including Aftonbladet a Swedish car would be sought, in connection with a kidnapping drama. One would look forward to a Volvo, a rental car.

According to the newspaper, the Danish police have given Swedish colleagues the order that the car should be 'at all costs'. The entire country has temporarily been 'locked up' for this.

Important bridges between for example Seeland, the island on which Copenhagen is located, and Sweden were closed, as well as ferry services between Helsingør and Helsingborg, and connections with Germany. Also trains did not run.

Meanwhile, the Oresund bridge between Copenhagen and Malmö has been reopened. The Copenhagen Central Station has also been released again. That's what the police know on Twitter.