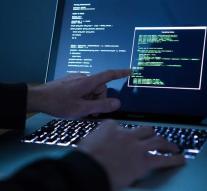 - Led by the German justice is a coiled global network of hackers, called Avelanche. Computer criminals use massive attacks by malware to plunder bank accounts.

The group made victims in more than 180 countries. The German prosecutor received help from international organizations such as Europol and Eurojust and colleagues in thirty countries in surgery Wednesday to roll up the network. Five people were arrested and 39 servers were seized. At Europol headquarters in The Hague, was set up a special command center that accompanied the operation.

Only in Germany did the hackers 6 million to steal bank accounts. The total damage is not known.