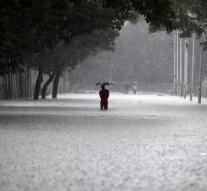 - In the southeast of India paralyze major floods Wednesday public life. It has, according to meteorologists in a hundred years rained so hard. The rains have driven in large parts of the state of Tamil Nadu, thousands of people from their homes and businesses paralyzed.

At the airport in the state capital, Chennai, dozens of flights have been deleted, after a runway under water was gone.

Chennai is the fourth largest city in India and a major industrial town where cars are made under more and more people work in outsourcing for companies like Ford, BMW, Infosys and Tata Consultancy. Thousands of companies in and around Chennai on Wednesday closed their doors because of flooding or power loss arising as a result of the floods.