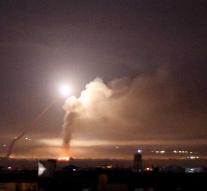 damascus - Several explosions have been heard at an air base near the Syrian capital Damascus. According to Syrian state media, there was an explosion in ammunition storage due to problems with electricity. They contradict that Israel has carried out an attack.

The Syrian Observatory for Human Rights reported that the explosions were caused by an Israeli air strike. According to the observatory, there were deaths and injuries. Regional authorities, who support the Syrian government, also pointed accusations at Israel and argued that the anti-aircraft forces tried to get the missiles out of the sky.

According to state media, which rely on a military source, that is not true. 'Air Base Mezzeh is not exposed to Israeli aggression,' the source said.