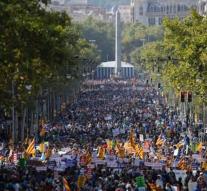 barcelona - In Barcelona thousands of people are in charge of the big protest march No tinc por (I'm not afraid). The protest march started at 6 pm and is a response to the attacks in Barcelona and Cambrils.

The demonstration ends at Plaza de Catalunya where a ceremony is held on a stage. Volunteers share red, white and yellow flowers. The Spanish King Felipe also participates in the march.