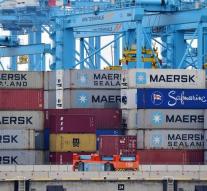 oss - UPDATE 18.39 Hours- A new, big-scale attack with ransomware, a virus that host computer systems so that the creators can claim ransom, meet businesses and institutions worldwide. In the Netherlands, at least, the container terminals of APM Terminals in Rotterdam port are out.

APM Terminals is part of the Danish transport giant A. P. Møller-Mærsk, who has also been hit by cyber attacks. The work is still at work at other locations of the worldwide active company. The consequences for the port in Rotterdam, where more container terminals are located, seem to be limited. 'It's all about APM,' said a port company spokesperson.

At MSD, the locations in Oss and Haarlem have been hit by cyber attacks, and probably also in other countries. Production is partly quiet. The company could not yet say ransomware and there is a connection with the attack on, among other things, APM Terminals

Also, packet carrier TNT Express indicated that it has a 'interference' in some systems. The company is busy mapping out the situation and taking action. Security research company Fox-IT assumes that more companies and institutions in the Netherlands are affected. Nameless, however, did not mention the company.

Ukraine in particular is severely affected. Almost the entire computer network of the government is flat there. Ukrainian banks and large companies have also become targets, including the Ukrainian electricity grid, aircraft manufacturer Antonov and the airport of the capital Kiev. In neighboring Russia, among others, oil company Rosneft has been affected.

In any case, the UK advertising agency has informed WPP that it belongs to the victims. The same goes for the French manufacturer of glass and other construction materials Saint-Gobain, which is active in the Netherlands under the name of Raab Karcher. Also the American candy and biscuit manufacturer Mondelez, known for brands like Milka, LU and Oreo, has been hit.