Home / World / Mafia house from The Godfather for sale 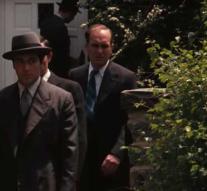 new york - It costs you $ 1.37 million (about € 1.2 million), but then you also have something: the house of Michael Corleone from the iconic film The Godfather from 1972 is for sale.

The stately property on 120 Longfellow Avenue on Staten Island (New York) is owned by Peter and Elaine Albert, who owned the property in 1977 for the then already respectable amount of $ 195. 000,- tapped the head. Elaine mainly fell for the stately appearance, she tells New York Post. She has seen the film only a few times: 'Although it remains strange to see Al Pacino (he played Michael Corleone) coming out of our front door. '