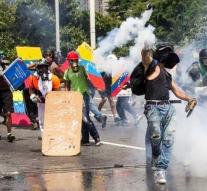 caracas - Venezuelan President Nicolás Maduro wants to prosecute security forces for the violence they have used against protesters during protests against his government. 'There have been complaints about the alleged abuse by government officials.

I have both ordered the prosecution of any government official who abused his power as well as those who have called for the strike, 'Maduro said Thursday. The president also called the protests fascist ambushes.

'These fascist ambushes have been taking five weeks now. There are victims. On Wednesday, another worker died who was shot by a sniper in Mérida, 'said Maduro about a victim in the city of Venezuelan Andes. 'These sharpshooters have been set aside to kill people. '

Maduro accused the Table of Democratic Unity (MUD), the covenant of opposition parties, of initiating a war against the people. There have been 39 deaths in protests in recent weeks.