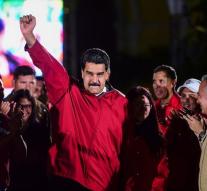 caracas - Venezuelan President Nicolás Maduro proposed Monday that the newly elected 'constitutional assembly' lifted the inviolability of parliamentarians. 'The sabotage of the National Assembly (parliament) must stop and we need to create order,' Maduro said, threatening to persuade parliamentarians.

He claims that he won the election because there would have been so many people voted on Sunday. Opponents boycott the poll and do not want a 'constitutional meeting' at all. According to the electoral council, the rise was 41.5 percent. The board has 545 members, mainly Maduro's wedding.

The president will lose the majority in parliament in 2015. On Sunday, Maduro chose the new board. It must reform the political system. According to critics, Maduro is a authoritarian regime. He would almost certainly lose the presidential elections of 2018 in the existing system.