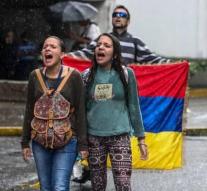 paris - The Venezuela government and the opposition are meeting on Wednesday in the Dominican Republic. That has been announced by the French Foreign Minister on Tuesday. He threatened the government of Venezuelan President Nicolás Maduro with sanctions if he did not participate in the negotiations.

'I am pleased to hear that the dialogue with the opposition begins on the Dominican Republic on Wednesday,' said Minister Jean-Yves Le Drian after a conversation with his Venezuelan colleague Jorge Arreaza Montserrat in Paris.

The opposition had already announced that it sent a delegation to negotiate with the Dominican President Danilo Medina on the terms of the conversation. 'In order to engage in serious talks, we demand concrete actions that show the willingness to solve the problems rather than gaining time,' said the statement.