Home / World / Maduro breaks with US 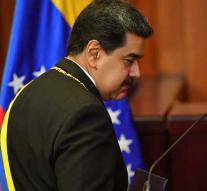 caracas - The Venezuelan president Nicolás Maduro breaks all diplomatic ties with the US. He does that after the American president Donald Trump had pronounced his recognition for Juan Guaidó...

President and opposition leader Guaidó called himself Wednesday as interim president after which a large number, especially South American countries, recognized him as head of state. Maduro gave American diplomats 72 hours in his country to leave the country.

It was the first time that Maduro made a name for himself after the action of Guaidó. The socialist leader appealed to supporters at the presidential palace Miraflores.