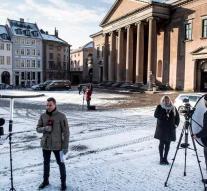 copenhagen - The Danish submarine and rocket builder Peter Madsen hears the verdict on Wednesday in the murder case of the Swedish journalist Kim Wall. Madsen has always denied that he is to blame for the death of Wall in his submarine.

Sweden and Denmark are captivated by the murder case, with at least six newspapers and stations that blog live every minute of the treatment. The court has had to make special room to accommodate 115 journalists from fifteen countries.

The Public Prosecutor thinks that Madsen Wall has strangled or decapitated after he had tortured her. 140 clips about murder, abuse or decapitation were found on his computers. After her death he saw off her arms, legs and head.

Madsen first said that he had put Wall on land alive, then that she died because a heavy trap hit her head and eventually she was stifled by suffocation because an accident caused exhaust fumes to enter the submarine. However, the Public Prosecution Service did not find any evidence for this.