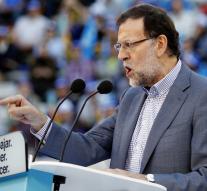 - The Spanish government on Wednesday stepped to the Constitutional Court to prevent the parliament from the northeastern region of Catalonia brings about the separation of Spain. Prime Minister Mariano Rajoy Wednesday accused the separatists in the Catalan parliament it " more than five centuries of wanting to destroy Spanish unity with their attack on democracy and the sovereignty of Spain."

He Catalan parliament votes Monday by a narrow majority on ' a roadmap to independence. " The region should be separated from Spain in eighteen months.

The Constitutional Court examines the issue Wednesday. According Madrid should be suspended step of the Catalan parliament and may put the Catalan regional government until further notice no steps to improve the separation.