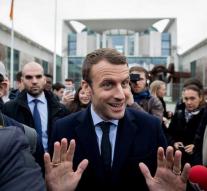 paris - The move of Emmanuel Macron to President of France, On Way !, is almost ready for parliamentary elections in a month. A spokesman for the movement, Richard Ferrand, said to French media on Monday that by Thursday they will be known who are candidates for the 577 seats of the French Lower House, the National Assembly.

Ferrand also said that Macron received two thirds of the votes cast on Sunday, the Presidency of On Road! Has laid down. A retired senior officer, Catherine Barbaroux, 68, is now interim president of Macron's Movement, which has a slightly longer name, The Republic on its way !, will participate in the elections on 11 and 18 June. Macron Pointed On Away! In April last year. This center party has no parliamentary seats yet.