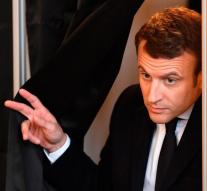 le touquet - Emmanuel Macron has cast his vote on sunday morning at 11.00. He did that in the town hall of his hometown of Le Touquet, in the department of Pas-de-Calais in northwestern France. The social-liberal presidential candidate, favorite in the polls, was in company of his wife Brigitte Trogneux.

The retiring president François Hollande was in his constituency Tulle, in central France, early in the year. He called the French to support Macron repeatedly after the first round. The unpopular socialist succumbed to the disastrous predictions and did not resign. The candidate of his party, Benoît Hamon, recovered only 6.4 percent two weeks ago.