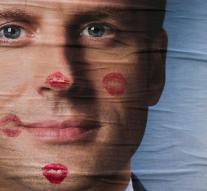 paris - A large number of emails from the campaign team of French presidential candidate Emmanuel Macron were released on the Internet on Friday. According to his team, there is a 'big coordinated hack'.

A user named EMLEAKS posted about nine gigabytes of files on the Pastebin site, where documents can be shared anonymously. It is still unclear who lies behind the name EMLEAKS. The Macron campaign team has not responded yet.

Whistleblower WikiLeaks finds the timing remarkable because the files could not affect the election results. At first, WikiLeaks twisted that it could sometimes be a joke. In a later second, the organization said 'a significant leak. '

Macron complained about hackers trying to influence the campaign's internet activities. Also, Russian media would have fought on him. Russia also denied anything to deal with internet attacks on the French presidential candidate.