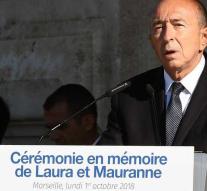 paris - The French Minister of the Interior Gérard Collomb has offered Emmanuel Macron his resignation on Monday. The president refused to agree. He does not want to lose one of his most important allies, writes the newspaper Le Figaro.

Collomb (71) had hinted a few weeks ago that he was considering leaving the government to make another attempt at Lyon mayor in 2020. He would say goodbye as Minister after the European elections in May next year. Macron, however, has decided not to let him go.