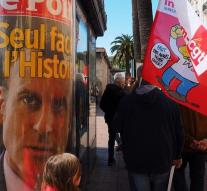 paris - The social-liberal favorite of the French presidential election, Emmanuel Macron, believes that the European Union (EU) must reform drastically. If not, France should take into account the prospect of a 'Frexit', leaving the EU.

The pro-EU candidate told the BBC on Monday that he and his rival Marine Le Pen of the Right Front National entered the last campaign week. French voters go to the polls on Sunday to determine which of the two will be the new president of France.

Le Pen has consistently deployed an anti-EU feeling and promised to hold a referendum on France's EU membership if she wins Sunday. It is mainly receiving support from rural and former industrial areas with her promises to introduce border controls and to significantly reduce immigration.

'I'm pro-European, I defended the European idea and a European policy during these elections because I believe that it is very important for the French people and for the place of our country in globalization,' said Macron, leader of The recently created movement and marche! (Forward). 'But at the same time we have to listen to our people, because they are very angry, impatient and the dysfunction of the EU is no longer possible. So from the day of my mandate, I will begin a reform of the European project and the European Union. ''

Macron added that if he would make the EU function as it does, it would be 'a betrayal.' ' And I do not want to do that, because after that we'll have a Frexit. ''