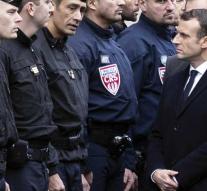 paris - French President Emmanuel Macron has invited representatives of, among others, trade unions and employers for consultations on Monday at the Élysée in Paris. Several sources have told the BFMTV channel that the consultation starts at 10.00 am and that it is about the demonstrations of the 'Yellow Hesjes' that have gotten out of hand four weekends in a row.

The 'Gilets Jaunes' argue against the policy of the French government that would undermine their purchasing power. The immediate cause was a tax increase on petrol and diesel. This measure had to lead to a cleaner environment. The government of Macron has been scratched back, but the spirit is not back in the bottle.