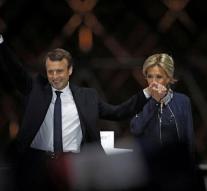 paris - Emmanuel Macron, elected Sunday's new president of France, received 66 percent of the votes. That made the French Department of Interior known on Sunday night on Sunday. The turnout rate was almost 75 percent.

At the exit poll after the polls closed, the social liberal of the party En Marche was! Already 65.1 percent of the votes.

His opponent Marine Le Pen of the Front National received 10.6 million votes (34 percent), a record record in the party's history.