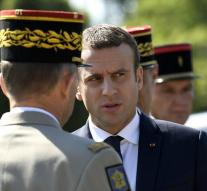 paris - The party of French President Emmanuel Macron has won an absolute majority in parliament. Not all votes have yet been counted, but the Ministry of the Interior reported that Macrons party La République and Marche (LREM) and its ally Modem had at least 331 of the 577 seats.

For an absolute majority, at least 289 seats are required. The number of seats for both parties was ultimately less than previously estimated on Sunday. Then went out between the 355 and 360 seats. 97 percent of the votes have been counted.