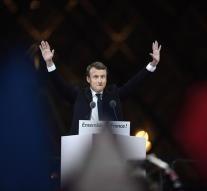 paris - Emmanuel Macron wants to do what he can to prevent French voters from voting on the Front National (FN) as president. That he said on Sunday evening in a victory speech for the Louvre.

The people who voted for UN candidate Marine Le Pen expressed 'anger, insecurity and convictions,' Macron said. 'I respect that. But I will do everything in the next five years to give them no reason to vote for extremes. '

Macron climbed the chair under the tones of the 'Ode to the Joy' from Beethoven's ninth symphony, the hymn of the European Union. He thanked his supporters and also made the word to the electorate who did not agree with his views but still voted for him to cross Le Pen.

Read all about Macron's victory (back) in our live blog.