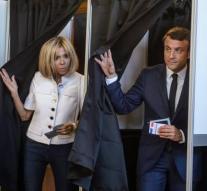 paris - The 'strange' ministers who recently took up French president Emmanuel Macron in his government made it well in the first round of parliamentary elections. All seem to be on the way to seat retention.

Bruno Le Maire went very comfortably to the second round of next Sunday. The Conservative Minister of Economy and Finance, a member of Les Républicains, received just no absolute majority in Normandy.

SEE ALSO: Party Macron on its way to a large majority

The prominent choice in the cabinet of Prime Minister Édouard Philippe (LRM) came to 45.32 percent of the votes. In doing so, he remained far-right-wing UN candidate Fabienne Delacour.

Minister of Housing and Spatial Planning Richard Ferrand, who moved from the Socialist Party to Macron's LRM, had spelled 33.95 per cent, despite being hit by a real estate affair in his Brittany district. His conservative competitor remained at 18.11 percent. Government spokesman Christophe Castaner introduced the candidate list by 44.04 percent in his constituency.

Minister Annick Girardin for Overseas Territories also scored well, even though she still has a fierce opponent in the second round. European Minister Marielle de Sarnez (MoDem) joined Paris, the result is not yet known.