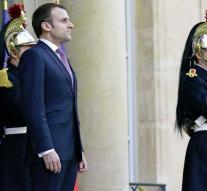 paris - French President Emmanuel Macron is entering a French national day for the commemoration of the victims of terrorism. The memorial day will be held for the first time in 2020. The Elysée...

191 people were killed in the attacks in Madrid and 1900 were injured. There were no such victims in any other jihadist terror campaign in Europe.

The Elysée reported that the national commemoration day is organized in consultation with organizations for victims of terrorism.

France has been hit by a series of attacks in recent years. For example, 130 people were killed by several terrorist attacks in Paris in November 2015.