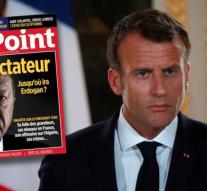 paris - The French president Emmanuel Macron has stood in the gap for freedom of the press. He did so in defense of the opinion magazine Le Point, which depicts the Turkish leader Recep Tayyip Erdogan as despot on the cover of the latest issue.

'It is completely unacceptable that @LePoint posters are taken from kiosks because they do not allow enemies of freedom, both in France and abroad', Macron responded Monday via Twitter. 'Freedom of the press has no price: without it, that is the dictatorship. '

Le Point placed a photo of Erdogan on the front page of the last edition, including the text: The dictator. How far Erdogan will go? In the main article the question is asked: 'Is Erdogan a new Hitler?'

The editors of the magazine said that in Avignon supporters of the Turkish president forced the manager of a kiosk to remove the posters. The same thing happened in Valence. Later the Le Point advertising notes were hung up again.