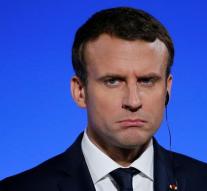 paris - French president Emmanuel Macron will call his colleagues from Russia, Germany and Ukraine on Monday to discuss the situation in eastern Ukraine. That was announced by his advisor on Saturday. The consultation with Vladimir Putin, Angela Merkel and Petro Porosjenko is a new attempt to find a solution to the conflict.

The four countries have tried it since 2014. In February 2015, the Belarusian capital Minsk reached an agreement on a ceasefire. However, that did not end the violence in the region on the Russian border, where separatists served. The battle has already required about 10,000 lives.