Home / World / Macron and Trump together against chemical attack 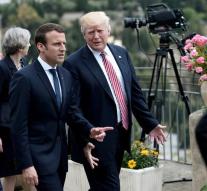 paris - French President Emmanuel Macron and US President Donald Trump will work together to find a common answer in the event of a new chemical attack in Syria. That they agreed on Tuesday during a telephone conversation.

Macron also invited Trump to visit the national holiday in Paris on July 14th. This year marks the anniversary of the First World War. It has been 100 years since the United States was involved in this battle.

The French leader said earlier that Paris could start air attacks against targets in Syria if a chemical attack occurs.