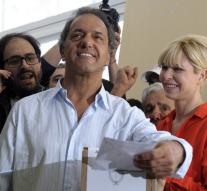 - Mauricio Macri Sunday seems to have the Argentine presidential election won. According to the first exit polls from two local television stations, the mayor of the capital Buenos Aires won more votes than Daniel Scioli, of the ruling party.

It was Sunday at the second and decisive round of the Argentine presidential election.

Over the past twelve years, the South American country was ruled by the Kirchner couple. First Néstor Carlos Kirchner (2003-2007) and then his wife and later widow Cristina Fernández de Kirchner.